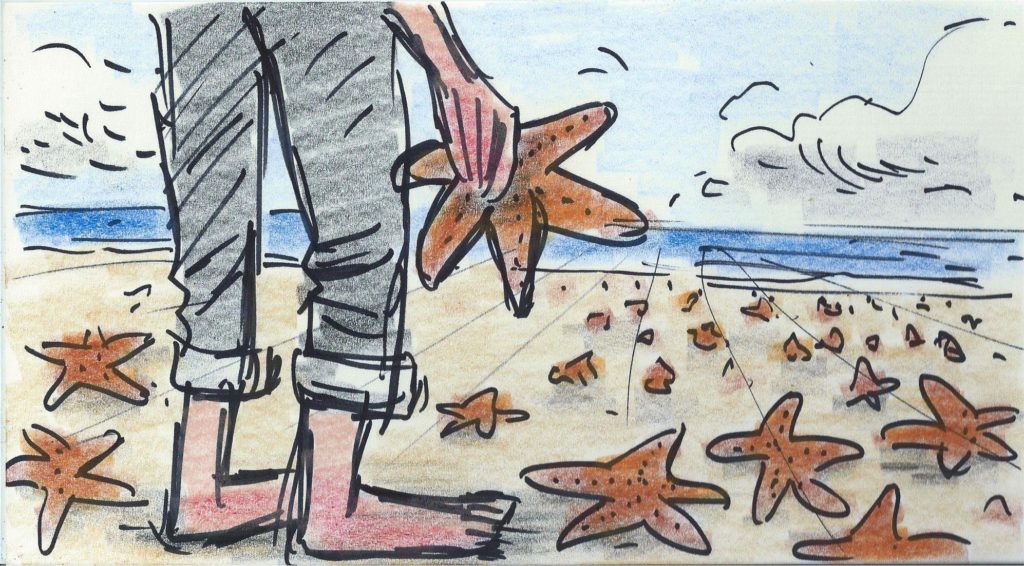 You may be familiar with the starfish story, a reminder of how one person can make a difference.

In the story, a man was walking along the beach after a heavy storm. During the storm, debris from the sea washed up on the shore- seaweed, driftwood, and various shells adorned the moist sand. In the distance, along the shoreline, the man saw a child playing in the surf. As he grew closer, he saw that the child was running inland, picking something up from the sand, and then throwing it into the ocean. He would time his run so that he could get as far out as possible without getting overwhelmed by the waves.

As the man got closer, he saw that the ground was littered with countless starfish of various sizes, each drying out in the sun. The boy was collecting as many as he could and throwing them back into the water.

“What are you doing?” the man asked.

Without stopping, the boy replied, “the storm washed all these starfish up, and they’re going to dry out in the sun. I’m throwing them back into the water so they’ll survive.”

The man looked around and noted just how many starfish there were- far too many for a child to collect in time. “But there’s too many,” he said. “You should just go play, you can’t possibly make a difference.”

The boy picked up another starfish and threw it back into the water. “Made a difference to that one.”

It’s a wonderful story, and a great reminder that any of us can make an impact in someone’s life. Often, even a small act can make a huge difference- one that will never be forgotten. But, in a sense, the man had a point. No matter how much the boy’s actions meant to the ones he could save, what of the other starfish?

The man asked the right question, but he didn’t act on it. Imagine what would have happened if he had picked up a starfish and put it back into the ocean; the boy would know he’s not the only one trying to help, and even more could have been returned. What if he had called others to come help, or if people passing by had spent even jut a few minutes helping. The child’s first efforts would have been exponentially increased, and even more could be helped.

That’s how we see things, anyway. Operation Safe Escape brings people together from different backgrounds and areas of expertise, all with one thing in common: they saw that people needed help and they were willing and able to make a difference. We stand united against all forms of abuse, and will always be there when you need us.